Registration in the EU

The company sir W.G. Armstrong, Whitworth & Co Ltd from Newcastle-on-Tyne started in 1902 with their own Motor Car Department. From this moment till the Great war started it produced about 3000 automobiles. Besides the production of vehicles for the war in the period 1914-1918 the company never made cars anymore. It’s uncertain how many cars survived today from the total Armstrong Whitworth production. After research by several enthusiastic car lovers and some of them specialised in Armstrong Whitworth, we presume that between 10 to 15 cars are still in existence, about 6 of these cars are in a very good and usable condition. These cars are stationed in the United Kingdom and in Australia. The cars are made in the period 1908 till 1914. This Armstrong Whitworth has a wheel base of 99 inch of which no other example is known at this moment. In Newcastle-on-Tyne is a 15-20 H.P. on display in a museum, this car has a wheel base of 111 inch, all other known Armstrong Whitworth cars are much larger.  It’s possible that there are other Armstrong Whitworth cars or car parts still around somewhere but the percentage of surviving cars is not more then 0,5% of the complete production. The average new price of a Armstrong Whitworth was around 600 British Pounds this was equal with eight times a year’s salary of a craftsman in those days. Armstrong Whitworth produced very solid, luxurious and expensive automobiles and this is probably the reason why the production numbers stayed so low.

This Armstrong Whitworth 15-20 H.P. Clifton Coupé was sold in 1912 to mr. George Jordan in Melbourne. It’s almost certain that the car was delivered by Till Motor Engineering Pty. Ltd. established 360 Londsdale Street, Melbourne.
Former owners tried to find the history of the car but it stays uncertain what happened exactly. It is known that the car finally was used on a farm in Waubra, Victoria, Australia, for agricultural purposes. In 1962 the car was sold to a collector and a first attempt was made to restore it. In 1980 the car was sold to mr. Collis who spend several years to work on the car and finally finished the project. Now the car is in a excellent condition, It is clear that the restoration was very thorough and complete with a lot of attention for details. Technically the car is almost perfect and very original. Take a look at the suspension of the rear axle and the way it’s designed by using a combination of semi elliptical and quarter elliptical springs with an extra coil spring that is working as a shock absorber. To design and produce this construction is a  wonderful example of engineering and craftsmanship.
This Armstrong Whitworth has a registration in Belgium and can easily be registered in every country within the EU.
This car is unique and in a mint condition. It played a role in the Australian television series ANZACS , about the Australian and New Zealand soldiers that went to fight in the Great War. It is a valuable piece of history of the British automotive industry and it can be used for events to be shown as a beautiful example in the development of the modern motorcar.

This car is sold. 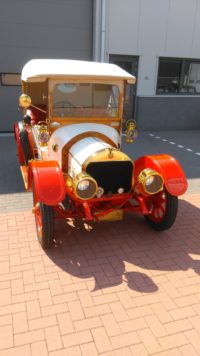