Drum brakes on all wheels

This Opel was sold during the Amsterdam RAI which was held in January 1928. The buyer was a cheese merchant and lived in the province of Utrecht. The Opel received the provincial number L4332. The family used the car a lot, also for holidays to Luxembourg. During the war the car was hidden and after the war the car was taken over by the son-in-law, Mr. M.M. Schepman, who had a dentist practice in Zwartsluis and Genemuiden. On March 27, 1953 the registration number was issued NX-14-22 to replace the Provincial license plate. The residential address, Kerkstraat 45 in Zwartsluis, is shown on the registration papers. At least twice a week, Mr. Schepman drove to Genemuiden for his practice, taking the ferry over the “het Zwarte water”. At a certain moment the Opel has been traded for more modern transport. What exactly happened to the car is not certain but it’s clear that the brothers “de Koning” from Oud-Beijerland have bought the Opel for their collection of classic cars. There is a license paper in the name of Mr. de Koning, issued on 20-02-1958. The Koning brothers owned the KONI shock absorber factory and had an extensive collection of special automobiles. After the death of these two collectors the collection was sold and the Opel ended up at the local Mercedes dealer “garage Wust”. The Opel was stored in the former auction building in the centre of Oud-Beijerland and was still in its original state.
In the spring of 1987, contact was established between the Wust family and Mr Bos from Strijen. The sale was closed and the Opel moved to Strijen on July 21, 1987, where a total restoration was started. During the restoration a ferry ticket was found under the footboard from the ferry at Genemuiden. Mr. Wust also brought the license papers of the car with the former owner, MM Schepman in Zwartsluis.
In 1987, when the address Kerkstraat 45 in Zwartsluis was searched for, this no longer appeared to exist. Inquiring with local people indicated that there had been a reconstruction of the village centre and that there had been a change in the numbering. The house existed but then under a different address. One person also knew of the dentist who lived there and of the very old car he always drove. In the house in question Mr. P. Hein appeared to live and he knew almost nothing about history, but he indicated that the dental practice was still present in the village. Subsequently, information was requested at the dental practice and the dentist appeared to have taken over the practice of Mr. Schepman, who had meanwhile moved to Vlissingen. Address and telephone number were exchanged. Mr. Schepman was contacted and he, along with his wife, came over to have a look at the Opel during the restoration. His wife knew a lot about the time that her father owned the Opel in the thirties.
Meanwhile, the restoration is already 30 years ago and the Opel is used for meetings with old-timers and Opel club meetings. Since about 2010, not much use has been made because of the owner’s age and since October 2018 the Opel has been completely checked and is now again in good condition and ready to be used.

Technique,
The fuel tank has been disassembled and thoroughly cleaned inside, checked for damage on the outside and provided with a new layer of paint. Near the fuel tank is a 6 Volt Lucas fuel pump installed which can be switched on with the ignition, this pump pushes the fuel to the carburettor. The 4 cylinder engine is heavy and despite the content of only 2600cc there is enough torque to move the heavy car smoothly. The horn, alternator, ignition and starter motor are from Bosch, all original and very well made. The valves are covered with two removable lids to be able to oil the valve stems with some regularity. The carburettor is a Solex that is easy to adjust. The gearbox is driven by a dry plate clutch, three forward gears and one reverse, all not synchronised. The rear axle suspension is with two quarter elliptical spring packages which are clamped on the chassis. There are two shock absorbers mounted that operate by a retractor, the damping is created by the automatic clamping of the shock absorber belt. The brakes are operated on all four wheels with a cable system. A new 6Volt battery was installed in August 2018 with the greatest possible power fitting within the dimensions of the battery box under the front seat.

Exterior,
The paintwork is done in three colors, entirely to the original state. The mudguards and the parts that cover the chassis are black. The body is light grey with a dark grey line and the window frame is dark grey. The paintwork is now more than 25 years old but still in an optimal condition. The nickel work is limited to the headlight edges, the radiator cover, the door fittings and some details in lighting and accessories. On the front fenders are the two spare wheels and on the back is a rack for a trunk, the rear of the body is equipped with aluminium strips to protect the body. The whole is in a very good condition and on some spots there is minor damage caused by use. The fit of the sheet metal parts and the doors is very nice, everything closes neatly and also the bonnet is good and tight to close.

Lighting,
The lighting installation is original for the most part. However, some changes and additional fuses have been installed in the wiring. The headlights are the original “box-shaped” from Bosch and the rear lights are extra, compared to the original single rear light combined with the brake light. On the photo from 1953 is an extra lamp mounted on the inside of the left front mudguard. For this the lamp support is still with the car, the lamp is missing.

Interior,
The interior is in very good condition. For the upholstery a high quality grey fabric was used that almost completely matched the original upholstery as it was present in the car befor the restoration. The dashboard is equipped with all original instruments and the key is to operate the ignition switch as well as the lock on the gearshift. Under the front seats and in front of the seats are removable floor parts for maintenance and access to the battery. There are storage compartments in the doors and all windows are framed with a wooden finish. The division is provided with engraved glass and can be opened in two parts. The front windscreen can also be opened for extra ventilation by turning it upwards with a knob. In the rear are two seats mounted that can be folded into the floor. A fold-away footrest for a comfortable seat is available for the rear seat. The windows in the doors and in the rear panel can all be opened with a turning mechanism. In the back, the seat is very comfortable and boarding is fairly spacious and easy. On the front seat the space is more limited and certainly for the driver it is a bit narrow to operate the pedals and gearshift.

The driving,
the Engine is started by pushing in the ignition key first to activate the petrol pump pumps and the ignition. When cold, use the choke fully and do retard the ignition slightly. The engine is easily started by pressing of the start button located on the floor. On the steering are controls for ignition and throttle and it’s easy to operate. Shifting the gears is pretty smooth and the clutch grabs very calm when starting off. The engine has a lot of torque despite the limited content and only 4 cylinders. The car runs quite smoothly and responds well to the throttle and steering. Some use is required for shifting, the shifting is good by simply allowing the clutch to emerge between the gears, in the neutral position. The downshifting is a bit trickier. The steering is very nice and direct, especially for a heavy car like this. The visibility is good and estimating the size of the car is also easy. Even at higher speeds, the car is easy to drive and handling needs little effort.

For more information, a test drive or just a visit to have a look yourself without any obligation, please let us know. 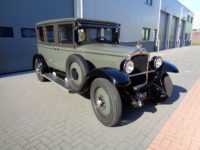 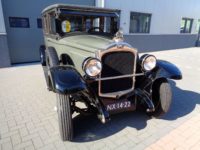 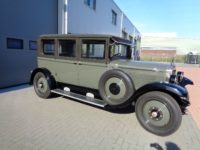 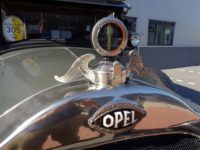 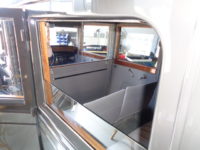 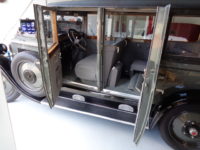 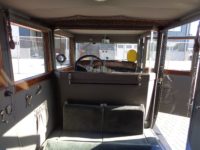 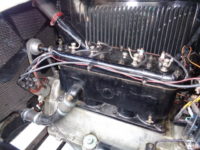 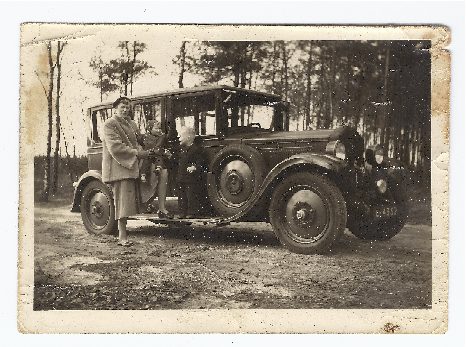